Teacher one to one check progress ( we can swap this around )

12:20 Get together - Completed may leave else stay for further guidance on activity / topic

4.3.1 State the fundamental operations of a computer.

4.3.2 Distinguish between fundamental and compound operations of a computer

Operations on a collection ?

Operations on a stack ?

Operations on a array?

Operations on a queue?

Create  a working program based on the Pseudocode  in Python or language of your choice.

ivision is one of the four main operations in math. When you divide a number, you are basically just splitting it into even groups. For example, 24 divided into 3 even groups would mean you have 8 groups (24 / 3 = 8). Sometimes a number divides evenly, but other times you have numbers left over. These numbers are called the remainder.

** It may be helpful to think back to your early math lessons, before you learned fractions and decimals. Mathematics with whole numbers behaves differently - when dividing numbers that aren’t even multiples, there’s always some amount left over. That remainder is what the modulo operation returns.

Some examples may help illustrate this, as it’s not necessarily intuitive the first time you encounter it:

The following algorithm is constructed for the sub-program all_even(N).

(a) Explain why this algorithm does not obtain the correct result. [2]

(b) Outline what should be changed in the algorithm to obtain the correct result. [3]

For reference Past Paper May 2021

14. The following flowchart is intended to represent an algorithm in which numbers that are input cannot be negative.

A further change has been requested to enable the calc of the average of the  numbers entered. The avaerage should be output at the end of the program.

Based on flow chart construct an algoroithm using pseudocode. That inlcudes the required changes.  [8]

4.2.3 Discuss an algorithm to solve a specific problem.

Students should be expected to discuss the differences between algorithms, including both standard and novel algorithms. For example, discussing the advantages and disadvantages of using a binary search as opposed to a sequential search.

4.1.2  Evaluate whether the order in which activities are undertaken will result in the required outcome

4.1.3  Explain the role of sub-procedures in solving a problem

This means TESTING an algorithm using SAMPLE DATA.For example, the following should add up all positive numbers in an array containing 5 numbers. Test with NUMS = [ 5 , 5 , 0, 2 , 2 ]

1) The algorithm has 1 issues which is the order of activities, identify the problem it and write correct code in Python

2) The algorithm requirement has changed in that it should accept an array of positive and negative integers, but only output sum the positive integers

How to implement a Queue using a Linked List

Queue is  a very simple data structure, you only have to manipulate FRONT and REAR to get Queue property.

Main Queue Operations:
1)EnQueue(): Inserts an element at the rear of the Queue.
2)DeQueue(): Remove and return the front element of the Queue.

Define two Node pointers 'front' and 'rear' and set both to NULL.

Queue is very simple data structure, you only have to manipulate FRONT and REAR to get Queue property.

Inserting an element in Queue. 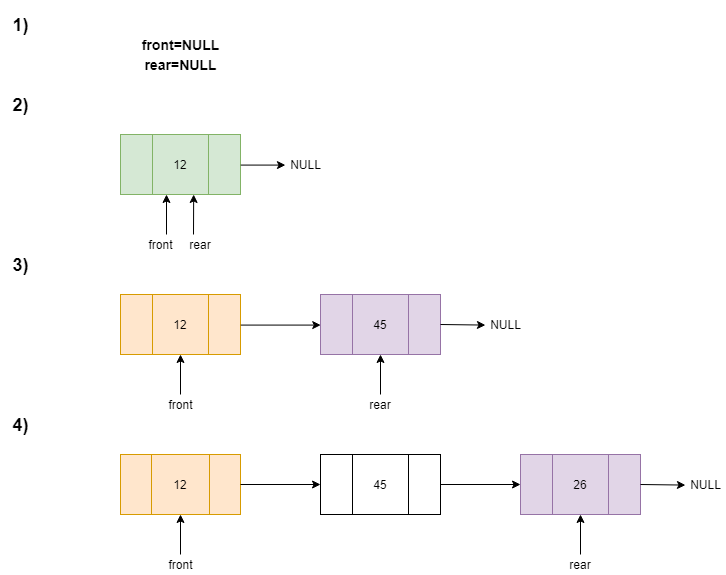 Explain why a stack is not an appropriate data structure for managing queues.

Draw a diagram or diagrams to show how a stack can be implemented using a linked list.

4.3.3 Explain the essential features of a computer language.

What is the difference between a Syntactical and a Semantic error in a program?

4.2.1 Describe the characteristics of standard algorithms on linear arrays

Work on 13 part b ,c and d  and share your pseudo code solution on forum link here

The code below is close but will not work, it has a semantic error. Your task is to get the program to working in PYTHON.

Given a list of five elements, the following images illustrate how the selection sort algorithm iterates through the values when sorting them.

The first value 21 is compared with the rest of the values to check if it is the minimum value.

3 is the minimum value, so the positions of 21 and 3 are swapped. The values with a green background represent the sorted partition of the list.

The value 6 is the minimum value, so it maintains its position.

The first element of the unsorted list with the value of 9 is compared with the rest of the values to check if it is the minimum value.

The value 9 is the minimum value, so it maintains its position in the sorted partition.

The value 33 is compared with the rest of the values.

Given a list of five elements, the following images illustrate how the bubble sort iterates through the values when sorting them

The values 21 and 6 are compared to check which one is greater than the other.